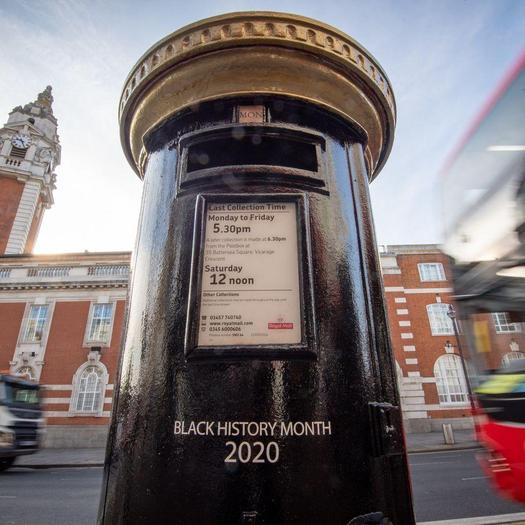 Black History Month originated in the US and first came to the UK in 1987. It aims to highlight and celebrate the stories of prominent black people, who may have been left out of mainstream, white-centric history.

In 2020, four red postboxes were painted black and adorned with the stories of famous Brits in honour of Black History Month. Comedian Sir Lenny Henry features on a postbox in Belfast, and nursing pioneer Mary Seacole, who cared for wounded soldiers during the 1853-1856 Crimean War, is pictured on a mailbox in Cardiff. A London postbox, in Brixton, features the painting ‘Queuing at the RA’ by British-Nigerian artist Yinka Shonibare while the Scottish box, in Glasgow, depicts footballer Walter Tull, who was the first black player signed by the Rangers.

We asked the children of Anson who they would celebrate on a postbox in recognition of the achievements of a famous black British icon or global hero!

The Black Champions at Anson

Mae Jemison is a doctor, teacher, astronaut and scientist. She also loves dancing. She is afraid of heights but she overcame her fear to become an astronaut. She was the first black woman to travel into space. She inspires us because she pursued many dreams and was able to work hard but also have fun!

Jessica does 7 different sports and is very fit. She won a lot of races. She runs very fast. She can jump higher than the others. She won a gold medal in the Olympics in 2012.

Clive Sullivan was Britain's first black rugby captain. He played for Wales and England. As a young boy he had to have lots of operations on his knees, feet and shoulders. He represented Great Britain 17 times and played in 3 World Cups.

Marcus is best known for his skill as a footballer, playing for Manchester United and England, but in recent times he has been campaigning to ensure that vulnerable school children are given meals during school holidays. Marcus has been working with a charity called FareShare to raise money and awareness. This is truly inspirational to us as he is only 22 and he is using his position to tackle an important issue that affects many children.

Stormzy was born in Croydon, Greater London, United Kingdom on Monday 26th of July 1993. Stormzy is known as a professional singer, songwriter, musician and rapper. His real name is Michael Ebeneezer Kawdjo Onari Owuo Jr. and he is 196 cm tall.

Stormzy's mum is called Abigail Owuo and he has one older brother and two sisters.

Stormzy went to school at Harris Academy in Croydon. He really enjoyed science. He was celebrated for rapping when he was 11 years old and he is now 27 years old. He enjoys visiting the seaside.

I think Stormzy is a good person because he is a great rapper and he looks after children. He's been to a Year 3 class to talk about his life with them. He has been a headlining act at Glastonbury festival and he’s net worth £20 million.

He is very popular on Facebook and he famously does not like people wasting his time. We think Stormzy should have an answer black postbox dedicated him because he is kind of creative musician who is music we enjoy and he is the richest rapper in the UK.

Zadie Smith is a well renowned author. Her first novel White Teeth is a best selling book and she has won a number of awards for this book. White Teeth has even been turned into a TV drama. She was born in Willesden and went to Hampstead School. She then went on to study English Literature at Cambridge University. We find a truly inspiring because she has work tremendously hard to achieve the wonderful success she has had and she is from our local area. We all could be the next Zadie Smith!

Stormzy is best known as rap and hip-hop artist. He should also be noted that he has proved his academic abilities by performing exceptionally well in his GCSEs achieving six a star grades as well as going onto A-level success.

He has won 2 Brit Awards, first in 2018 then in 2020. He is the first black British solo artist to headline Glastonbury which he performed wearing a Banksy created stab vest. His performance created emotional responses making his audience angry as well as happy and generating much publicity for his political beliefs. Indeed he consistently uses his status as a performer to address issues of racial inequality and to improve black lives.

Stormzy has donated and pledged a great deal of money to charity including giving £100,000 to the victims of the Grenfel fire. He recently gave £500,000 to fund scholarships for disadvantaged students. His gift to the black heart foundation is the first major funding since the rapper announced plans in June 2020 to give away over £10 million in over a decade to help organisations that are dedicated to fighting racial equality in the UK.

Anthony Joshua, also known as AJ, is a British professional boxer who is a two time unified heavyweight champion. His journey to success is an inspiration. From a young age he was in trouble often and was well known to the police. He was even held in prison for 2 weeks. His biggest achievement was turn his life around for the better. He focused on sports and borrowed £25 from his cousin for his first pair of boxing boots when he took it up as a hobby.

He was always very sporty. In fact in year nine he completed a 100 metre race in just 11.6 seconds! So it's no surprise that he was regularly offered deals for a professional career in boxing including one for £50,000. However AJ turned them down as he wanted to earn it and work his way up. proving to us what a great role model he is for sports.

"I didn't take up sport for money, I want to win medals”.

Professional American basketball player Kobe Bryant was widely regarded to be one of the best players of all time. In his 20 year career playing for the LA Lakers he won five NBA Championships and scored a whopping 33,643 points! As well as being an accomplished athlete, Bryant was the first African-American to win an Academy Award for Best Animated Short film ‘Dear Basketball’. Kobe was also passionate about a number of causes donating his time and money to charities such as the Make-A-Wish Foundation and setting up his own foundation to support young people in need. Tragically Kobe Bryant died earlier this year in a devastating helicopter accident, alongside his 13-year-old daughter. He is an inspiration and a role model to us and many others because he believed that "great things come from hard work and perseverance. No excuses."

Barack Obama is an inspirational figure for people as he has shown the world everybody is capable of achieving their ambitions, regardless of their skin colour.

Obama was the first black president of America (2009-2017). As soon as he became president, he made it his priority to make sure that everybody in his country could afford healthcare, helping over 20 million people. Furthermore, Barack Obama was an integral part of creating the Paris Agreement with countries around the world. Due to his efforts many countries are reducing their carbon emissions and therefore reducing the effects of climate change. Throughout his presidency he fought for equality for all people. In 2009 he was awarded the Nobel Peace Prize for his great deeds and uniting people around the world.

Even though Obama is no longer president he, and his wife, still continue to make the world a better place through their foundation they believe they can inspire and connect people.

Muhammad Ali won an Olympic gold medal for the USA in 1960 and was named as Sportsman of the Century by Sports Illustrated Magazine. Muhammad Ali refused to fight in the Vietnam war and went to prison for his beliefs, as he felt it was wrong to kill innocent Vietnamese men, women and children who have never done anything to hurt him. The heavyweight boxing champion spent his life fighting for freedom and justice, even to the detriment of his boxing career: equality and fairness mattered more to him than money and boxing medals. He was also a talented communicator and poet, gracing the world with his wit and personality which helped spread his message far and wide; he was universally admired.

Our Own Anson Champions

Nekoda and Natalie are two, of many, former pupils who have gone on to achieve great things. Nekoda attended our Judo Club from a very young age and went on to become Commonwealth and British champion. Natalie performed in an Anson Talent Quest and went on to win the Open Mic UK Championships in 2019. If you are a former Anson pupil, who has achieved anything in your adult life, reach out to us so we can share your story and inspire our current pupils. During Black History Month the children in Key Stage Two used Google Classroom to share the music artists they wanted to see being given an Anson MOBO award. This was our way of celebrating music of black origin in 2020. 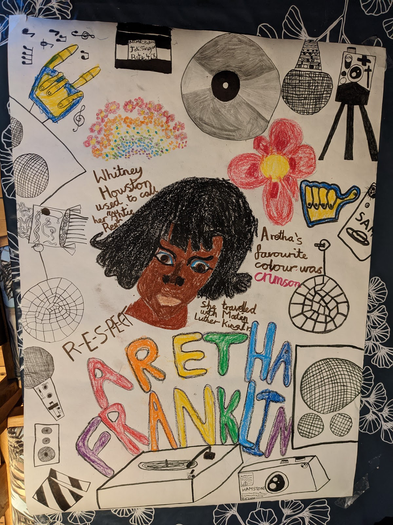 Ellie & Freddie sent in this amazing piece of art to celebrate Aretha Franklin. Below are some of the most requested songs during the Anson MOBOs.